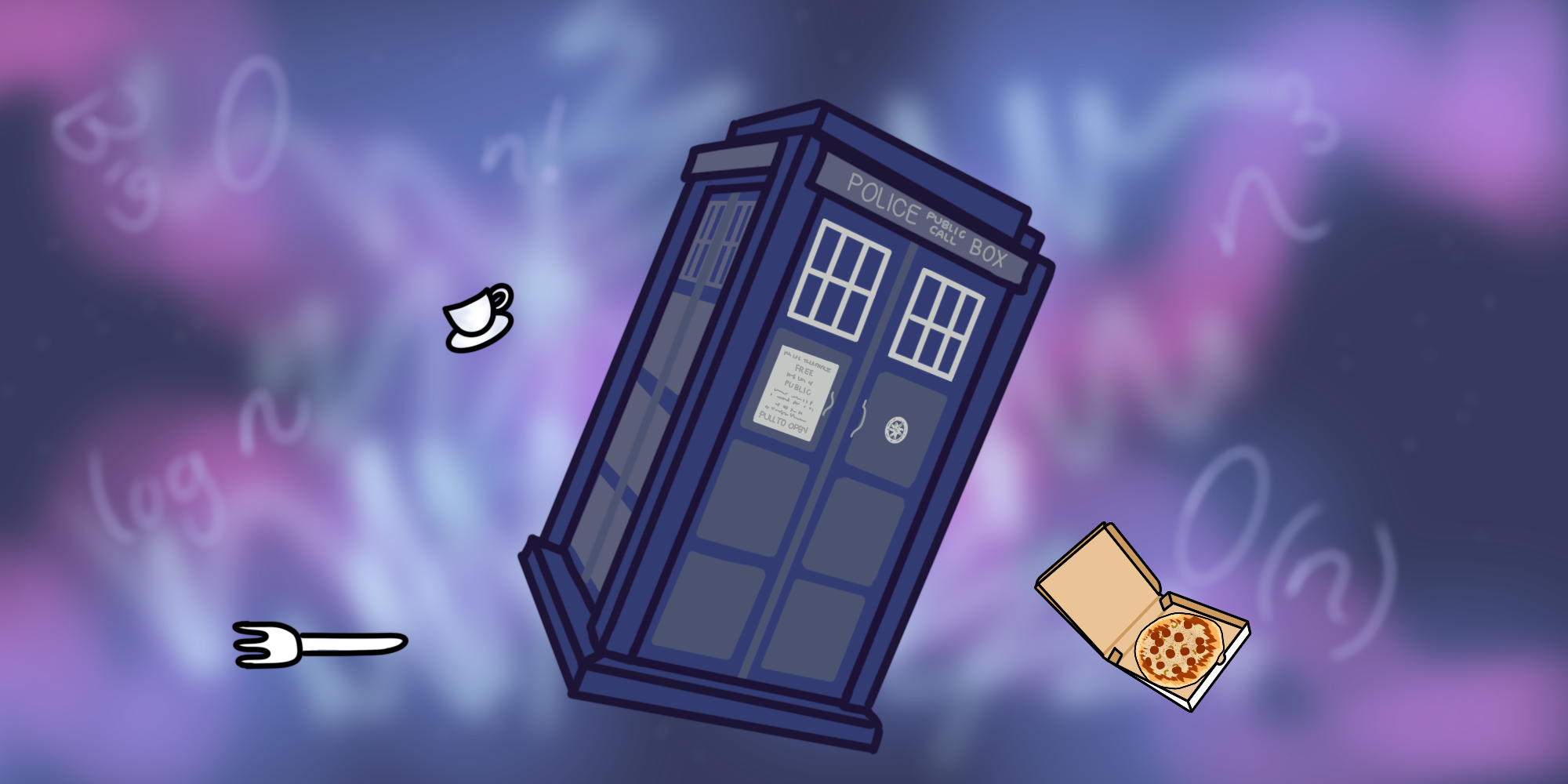 A coffee-break introduction to time complexity of algorithms

A groundwork understanding of algorithm time complexity and Big O notation in about fifteen minutes with Go code examples and silly food cartoons.

Just like writing your very first for loop, understanding time complexity is an integral milestone to learning how to write efficient complex programs. Think of it as having a superpower that allows you to know exactly what type of program might be the most efficient in a particular situation - before even running a single line of code.

The fundamental concepts of complexity analysis are well worth studying. You’ll be able to better understand how the code you’re writing will interact with the program’s input, and as a result, you’ll spend a lot less wasted time writing slow and problematic code. It won’t take long to go over all you need to know in order to start writing more efficient programs - in fact, we can do it in about fifteen minutes. You can go grab a coffee right now (or tea, if that’s your thing) and I’ll take you through it before your coffee break is over. Go ahead, I’ll wait.

What is “time complexity” anyway

The time complexity of an algorithm is an approximation of how long that algorithm will take to process some input. It describes the efficiency of the algorithm by the magnitude of its operations. This is different than the number of times an operation repeats; I’ll expand on that later. Generally, the fewer operations the algorithm has, the faster it will be.

We write about time complexity using Big O notation, which looks something like O(n). There’s rather a lot of math involved in its formal definition, but informally we can say that Big O notation gives us our algorithm’s approximate run time in the worst case, or in other words, its upper bound.[2] It is inherently relative and comparative.[3] We’re describing the algorithm’s efficiency relative to the increasing size of its input data, n. If the input is a string, then n is the length of the string. If it’s a list of integers, n is the length of the list.

It’s easiest to picture what Big O notation represents with a graph:

Here are the main important points to remember as you read the rest of this article:

There are different classes of complexity that we can use to quickly understand an algorithm. I’ll illustrate some of these classes using nested loops and other examples.

A polynomial, from the Greek poly meaning “many,” and Latin nomen meaning “name,” describes an expression comprised of constant variables, and addition, multiplication, and exponentiation to a non-negative integer power.[4] That’s a super math-y way to say that it contains variables usually denoted by letters and symbols that look like these:

The below classes describe polynomial algorithms. Some have food examples.

A constant time algorithm doesn’t change its running time in response to the input data. No matter the size of the data it receives, the algorithm takes the same amount of time to run. We denote this as a time complexity of O(1).

Here’s one example of a constant algorithm that takes the first item in a slice.

With this constant-time algorithm, no matter how many cupcakes are on offer, you just get the first one. Oh well. Flavours are overrated anyway.

The running duration of a linear algorithm is constant. It will process the input in n number of operations. This is often the best possible (most efficient) case for time complexity where all the data must be examined.

Here’s an example of code with time complexity of O(n):

Here’s another example of code with time complexity of O(n):

It doesn’t matter whether the code inside the loop executes once, twice, or any number of times. Both these loops process the input by a constant factor of n, and thus can be described as linear.

Now here’s an example of code with time complexity of O(n2):

Because there are two nested loops, or nested linear operations, the algorithm process the input n2 times.

Extending on the previous example, this code with three nested loops has time complexity of O(n3):

A logarithmic algorithm is one that reduces the size of the input at every step. We denote this time complexity as O(log n), where log, the logarithm function, is this shape:

One example of this is a binary search algorithm that finds the position of an element within a sorted array. Here’s how it would work, assuming we’re trying to find the element x:

I find the clearest analogy for understanding binary search is imagining the process of locating a book in a bookstore aisle. If the books are organized by author’s last name and you want to find “Terry Pratchett,” you know you need to look for the “P” section.

You can approach the shelf at any point along the aisle and look at the author’s last name there. If you’re looking at a book by Neil Gaiman, you know you can ignore all the rest of the books to your left, since no letters that come before “G” in the alphabet happen to be “P.” You would then move down the aisle to the right any amount, and repeat this process until you’ve found the Terry Pratchett section, which should be rather sizable if you’re at any decent bookstore because wow did he write a lot of books.

Often seen with sorting algorithms, the time complexity O(n log n) can describe a data structure where each operation takes O(log n) time. One example of this is quick sort, a divide-and-conquer algorithm.

Quick sort works by dividing up an unsorted array into smaller chunks that are easier to process. It sorts the sub-arrays, and thus the whole array. Think about it like trying to put a deck of cards in order. It’s faster if you split up the cards and get five friends to help you.

The below classes of algorithms are non-polynomial.

An algorithm with time complexity O(n!) often iterates through all permutations of the input elements. One common example is a brute-force search seen in the travelling salesman problem. It tries to find the least costly path between a number of points by enumerating all possible permutations and finding the ones with the lowest cost.

An exponential algorithm often also iterates through all subsets of the input elements. It is denoted O(2n) and is often seen in brute-force algorithms. It is similar to factorial time except in its rate of growth, which as you may not be surprised to hear, is exponential. The larger the data set, the more steep the curve becomes.

There are further time complexity classes less commonly seen that I won’t cover here, but you can read about these and find examples in this handy table.

Here’s a recursive function that eats pies until no pies are left:

The time complexity of a single execution is constant. No matter how many pies are input, the program will do the same thing: check to see if the input is 0. If so, return, and if not, call itself with one fewer pie.

The initial number of pies could be any number, and we need to process all of them, so we can describe the input as n. Thus, the time complexity of this recursive function is the product O(n).

Say we have a program for an office party. If our program looks like this:

P vs NP, NP-complete, and NP-hard

P versus NP is an unsolved, open question in computer science.

Anyway, you don’t generally need to know about NP and NP-hard problems to begin taking advantage of understanding time complexity. They’re a whole other Pandora’s box.

Approximate the efficiency of an algorithm before you write the code

So far, we’ve identified some different time complexity classes and how we might determine which one an algorithm falls into. So how does this help us before we’ve written any code to evaluate?

By combining a little knowledge of time complexity with an awareness of the size of our input data, we can take a guess at an efficient algorithm for processing our data within a given time constraint. We can base our estimation on the fact that a modern computer can perform some hundreds of millions of operations in a second.[1] The following table from the Competitive Programmer’s Handbook offers some estimates on required time complexity to process the respective input size in a time limit of one second.

Keep in mind that time complexity is an approximation, and not a guarantee. We can save a lot of time and effort by immediately ruling out algorithm designs that are unlikely to suit our constraints, but we must also consider that Big O notation doesn’t account for constant factors. Here’s some code to illustrate.

The following two algorithms both have O(n) time complexity.

Here’s the output of the Go test:

Our first function, makeCoffee, completed in an average 0.29 nanoseconds. Our second function, makeStrongCoffee, completed in an average of 0.86 nanoseconds. While those may both seem like pretty small numbers, consider that the stronger coffee took near three times longer to make. This should make sense intuitively, since we asked it to triple the scoops. Big O notation alone wouldn’t tell you this, since the constant factor of the tripled scoops isn’t accounted for.

Becoming familiar with time complexity gives us the opportunity to write code, or refactor code, to be more efficient. To illustrate, I’ll give a concrete example of one way we can refactor a bit of code to improve its time complexity.

Let’s say a bunch of people at the office want some pie. Some people want pie more than others. The amount that everyone wants some pie is represented by an int > 0:

Unfortunately, we’re bootstrapped and there are only three forks to go around. Since we’re a cooperative bunch, the three people who want pie the most will receive the forks to eat it with. Even though they’ve all agreed on this, no one seems to want to sort themselves out and line up in an orderly fashion, so we’ll have to make do with everybody jumbled about.

Without sorting the list of diners, return the three largest integers in the slice.

Here’s a function that solves this problem and has O(n2) time complexity:

This program works, and eventually returns diners [88 87 56]. Everyone gets a little impatient while it’s running though, since it takes rather a long time (about 120 nanoseconds) just to hand out three forks, and the pie’s getting cold. How could we improve it?

By thinking about our approach in a slightly different way, we can refactor this program to have O(n) time complexity:

Here’s how the new program works:

Initially, diner 2 (the first in the list) is assigned the first fork. The other forks remain unassigned.

Then, diner 88 is assigned the first fork instead. Diner 2 gets the second one.

Continuing in this violent and rapid fork exchange, diner 16 is then assigned the third fork instead of 2, and so on.

We can add a print statement in the loop to see how the fork assignments play out:

This program is much faster, and the whole epic struggle for fork domination is over in 47 nanoseconds.

As you can see, with a little change in perspective and some refactoring, we’ve made this simple bit of code faster and more efficient.

Well, it looks like our fifteen minute coffee break is up! I hope I’ve given you a comprehensive introduction to calculating time complexity. Time to get back to work, hopefully applying your new knowledge to write more effective code! Or maybe just sound smart at your next office party. :)

“If I have seen further it is by standing on the shoulders of Giants.” –Isaac Newton, 1675